Fleetwood Town have endured a turpsyturvy season as the team looks towards making the playoffs in Joey Barton’s first full season in charge. The benching of star forward Ashley Nadesan in the draw at home to Gillingham caused a stir among the fans. 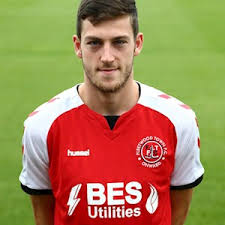 The match was seen as a winnable game at home that could push the team forward but head coach Barton has explained his decision to bench the player. Nadesan came in the second half after the hour mark and showed menace as he came close on some occasions to grabbing the winner.

According to Barton the 24-year-old had suffered a tight hamstring in the victory at Burton Albion and did not train until some days before the match. Barton revealed that playing Nadesan from the bench was a preventive measure as with 11 games left any injury would most likely rule the player out of the season.  This weighed heavily in the coach’s mind as he believes that the player needs to be managed properly until the end of the season.

On the back of the draw and Blackpool’svictory, Fleetwood fell to 10th on the League table and face a run of two away games. Walsall comes first on Saturday as the relegation-threatened club hosts Fleetwood before a potential playoffsix-pointer away to Coventry City.

Barton has not lost hope of making the playoffs as they sit just six points of the final slot held by Doncaster who have a game in hand. The former QPR midfielder believes that the unpredictable nature of the league could play a crucial role in the run-in.