Oldham Athletic face an uphill battle to keep no-nonsense defender George Edmundson as the number of teams interested in the player continues to grow by the day. The centre-back impressive performances this season has not gone unnoticed with a host of clubs looking to sign the player. 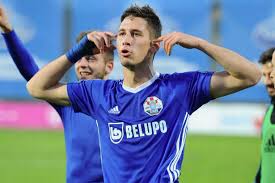 Scottish giants Rangers are the latest to be linked with the 21-year-old defender.  The Ibrox outfit wants to strengthen the defensive position and have identified Edmundson as the right fit for this position. The club currently has Connor Goldson and Nikola Katic as their first team pairing.

Backup centre Joe Worrall is expected to return to Nottingham Forest after his loan stint while veteran defender Gareth McAuley’s contract expires in the summer. Daily Mirror reveals that the club are looking at signing a central defender and Edmundson is high on the list due to his availability and price.

The 21-year-old is open to a summer exit from Oldham after a disappointing season in League Two. Sunderland boss Jack Ross is also interested in the player as he could potentially play in the Championship if the club wins promotion via the playoffs.

Barton led by former Manchester City midfielder Joey Barton are also interested in the young defender as he seeks to bolster the squad ahead of a promotion push in the League One next season.  Edmundson is valued at £450,000 which makes him a bargain signing for these teams.

Championship sides Stoke City and Hull City are also interested in the player in what could be a busy summer for Oldham.  The League Two club would be under serious pressure to cash-in on their prize asset this summer.

Given the looks of things, it is almost certain that Edmundson would leave the League Two outfit this summer. The 21-year-old has made 80 appearances for the club since breaking into the first team some seasons ago.